Show your support for a domestic sugar policy, prioritizing the production of beet sugar in Canada.

Hi, I am Jason Zeinstra and I’m Mandy Zeinstra.  Our farm name is Egersund Farms Ltd. and I have been farming on my own since ’95, and you (Mandy) - I just tag along.   Actually, Mandy also grew up on a farm and their farm turned 100 years old in 2013.

My dad and his business partner started farming together in 1976, the same year that I was born and they always worked together on the sugar beets.  They retired two years ago and Mandy and I bought a portion of their sugar beet acres in 2020, so this will be our third sugar beet crop.

We grow 80 acres of sugar beets, as well as soft wheat and corn on the irrigated land.   On the dryland, we grow peas, canola, wheat, soft wheat and durum.  We have about 14,000 acres of dryland. 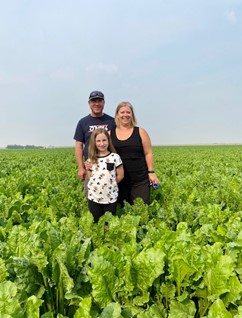 How did you get your start in farming?
I don’t know what really brought us into farming, I always enjoyed it growing up and same with you (gestures to Mandy).  We were both born and raised on a farm and then as we got older, we realized it was something we each really wanted to do.  It really wasn’t a question, that’s for sure, there’s no better life than being on the farm.

How have advances in equipment or technology changed the way you operate your farm?
We can now track everything on our phones through the operation center.  We know when that sprayer is out spraying the field and what product it’s putting down.  Our combines and grain carts also have scales so they’re keeping track the exact yields.

While the sugar beet technology isn’t as precise, we are able to weigh every load and get an up-to-date data analysis on what our sugar content is.  Whereas years ago, you wouldn’t find that out until the tail end.

How  have GMO's helped re-shape the sugar beet industry?
Back in the day before GM sugar beets, farmers would spray Norton, Betamix and Upbeet – the whole concoction – and the beets would turn completely yellow after spraying.  But now we’re able to spray Roundup and you can’t even tell – everything else dies – but you don’t see any changes with the beets.

We even went on a Research Tour in July and they showed a patch sprayed with Lontrel, where the beets had really wilted and went down.  Before GM sugar beets, those chemicals, cultivating or getting labor in to hoe the beets, were your only options.  Those options were very limited and expensive and hard to get.

There are a couple fields that we only sprayed once this year and the others twice.  But back in the day, doing the conventional Nortron/Betamix herbicide applications, we were hitting the beets up to 4 times a year with that concoction of chemical.  It would yellow them, causing them to wilt. Then, just as they would begin to pick back up again, you would have to go in and hit them again.  Now with Roundup, they’re able to keep growing without getting set back.

The chemicals we’re spraying are so much safer, that’s how we look at it.

The yields with the older genetics were a lot lower too.  You would dream about getting our current yields, back in the 90’s.  If my dad got 20 tonnes/acre, he would be excited.  Now it seems pretty easy to be over that 25-30 tonnes/acre yield.

I was even saying earlier that if it wasn’t for Roundup, I think the sugar beet industry in Canada would have been done.

The other big advance is pivots over wheel lines.  Back in the day, farmers would irrigate their beets with wheel lines, which is a 5-inch pipe with spoke wheels. There would be two separate lines that would cover a half mile, the length of an average field.  You would have to move them every 60,’ about three times a day, depending on how much water the land could take.  You’d move them at 5 in the morning, again at 1 pm and then again at 9 pm - so it would take a long time to go across a whole field. Now with pivots, you can go on your phone, start the pivot and away it goes.  Being able to water the crop so precisely has also helped a lot with the yields too.

How is your family involved in the farming operation?
Both our parent’s still want to run stuff and they still want to contribute.  Even though my dad is retired, he’s still very involved.  Even today, we were moving equipment and he’s always there to help.

I actually left my job in 2006 and I was going to look for something new, so I drove silage truck and took over the bookkeeping for the summer.  I still haven’t gone back and found a ‘real’ job and I’ve also been driving beet truck ever since 2006.  She’s the only female beet truck driver in all of Picture Butte!

Our daughter is still quite young, but she is pretty involved for a little kid.  She’s showing more interest in the farm and she’ll come out and sweep the canola for bugs with me, counting them out and then dumping the bugs out.

I taught her how to run the combine last year, but she wasn’t heavy enough to sit on the seat and release the safety, so she would sit with me and learnt how to drive it.  She loves going on the beet truck with Jason.  When she was little, I’d pick her up from daycare and drop her off at the beet truck with a snack and she’d go for three hours, just back and forth to the field, telling dad how to get there.